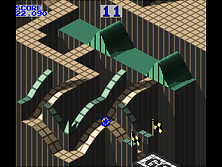 Marble Madness is an arcade video game designed by Mark Cerny, and published by Atari Games in 1984. It is a platform game in which the player must guide an onscreen marble through six courses, populated with obstacles and enemies, within a time limit. The player controls the marble by using a trackball. Marble Madness is known for using innovative game technologies. It was Atari's first to use the Atari System 1 hardware and to be programmed in the C programming language. The game was also one of the first to use true stereo sound; previous games used either monaural sound or simulated stereo. In designing the game, Cerny drew inspiration from miniature golf, racing games, and artwork by M. C. Escher. He aimed to create a game that offered a distinct experience with a unique control system. Cerny applied a minimalist approach in designing the appearance of the game's courses and enemies. Throughout development, he was frequently impeded by limitations in technology and had to forgo several design ideas. Upon its release, Marble Madness was commercially successful, becoming a profitable arcade game. Praise among critics focused on the game's difficulty, unique visual design, and stereo soundtrack. The game was ported to numerous platforms and inspired the development of other games. A sequel was developed and planned for release in 1991, but canceled when location testing showed the game could not succeed in competition with other titles.

The idea of this arcade game is deceptively simple: Guide a marble down a path without hitting any obstacles or straying off the course. The game is viewed from an isometric perspective, which makes it harder to stay focused on the direction the ball is to follow. There are tight corridors to follow and enemies to avoid. There is a 2-player mode in which players must race to the finish; otherwise you're racing against the clock.